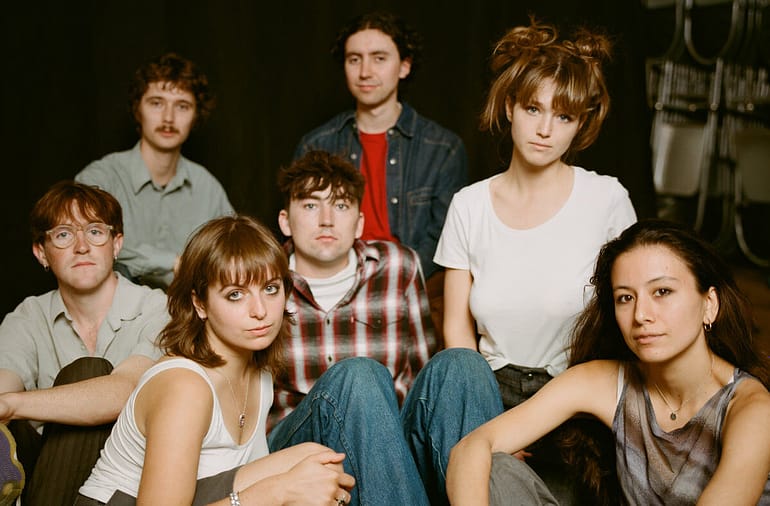 Black Country, New Road released their debut album, For the First Time on January 5th, 2021. Almost exactly a year later, they return with Ants from Up There. Although the band was quite hyped by the time their debut album was released, that admiration grew tenfold in the intervening 364 days. By the time Ants from Up There was released, BC, NR had already cemented themselves as one of the preeminent new voices in Indie music.

Four days before Ants from Up There was released, Black Country, New Road announced frontman Isaac Wood would be departing the group. Wood—whose deep London drawl and matter-of-fact lyricism elevated each BC, NR song into the stratosphere—cited struggles with mental health for his departure. The announcement of Wood’s departure was fresh on everyone’s minds when Ants from Up There was released on February 5th, 2022.

Upon first listen, Ants from Up There is immediately more approachable than their debut album. While it’s not as abrasive, frantic, or brooding as For the First Time, Ants from Up There packs a subversive emotional punch. It’s a bittersweet album, as Wood’s strained vocals bring about a sense of melancholy. This is—at least for the foreseeable future—the last BC, NR album to feature Wood on lead vocals. It’s almost like an unexpected farewell letter, making each track more important than the last. You want to listen intently to each and every word Wood sings, to feel his pain and experience it along with him. Many musicians open themselves up to audiences, bearing their emotional weaknesses for all. It’s understandable why many musicians tear themselves away from the spotlight, even after achieving success.

While a lot of the conversation around Ants from Up There naturally revolves around Wood’s sudden departure, it’s crucial to not forget the rest of the band. Now a six-piece, Black Country, New Road is Tyler Hyde (bass, vocals), Lewis Evans (saxophone), Georgia Ellery (violin), May Kershaw (keys, vocals), Charlie Wayne (drums), and Luke Mark (guitar). In Ants from Up There, the band embraces the sounds of early Indie. The eighth (and greatest) track, “The Place Where He Inserted the Blade,” is both nostalgic yet new, sounding like an glistening unreleased demo from Arcade Fire’s baroque-inspired debut album Funeral.

Similarly, the soft saxophone, guitar, and bass that slowly build up throughout the first few minutes of the ninth track, “Snow Globes” elicits memories of foregone days. As the song continues, however, the drums take on a crazed rush. Within the cacophony, Wood repeats the lines, “Oh, god of weather, Henry knows snow globes don’t shake on their own.” At first, he sings the lines with his signature detached tone, then his voice grows louder and it starts to quiver, as if on the brink of breaking. This moment is one of the most emotional ones on the album.

Countless times throughout the album, BC, NR creates moments that elicit drastic emotional responses. It’s incredible this is their second album in such a short amount of time. They have a sense of maturity often reserved for much more established acts, yet they display the same burning passion that catapulted them into the forefront of modern music.

Although Black Country, New Road will still continue, this is seemingly the end of the Isaac Wood-fronted iteration of the band. We are left with two incredible albums which will be stewed over, enjoyed, and directed for many years to come. I can see For the First Time and Ants from Up There becoming this generation’s On Avery Island and In the Aeroplane Over the Sea or Unknown Pleasures and Closer. Wood, similarly to Jeff Mangum and Ian Curtis, bared his soul in his songs, showing an incredible degree of vulnerability and openness. It’s apparent in the way he delivered his vocals. Simply listen to the way his voice strains as he shouts in the final track, “Basketball Shoes.”

Black Country, New Road will, undoubtedly, continue to be a powerful force in music for years to come. The band is already working on new material. The future is bright and knowing how quickly they were able to write and record such a great album as Ants from Up There, perhaps we won’t have to wait too long to hear even more great material from Black Country, New Road. For now, however, they’ve given us more than enough to keep us ruminating in our own internal inadequacies and uncertainties.

Listen to the album below: