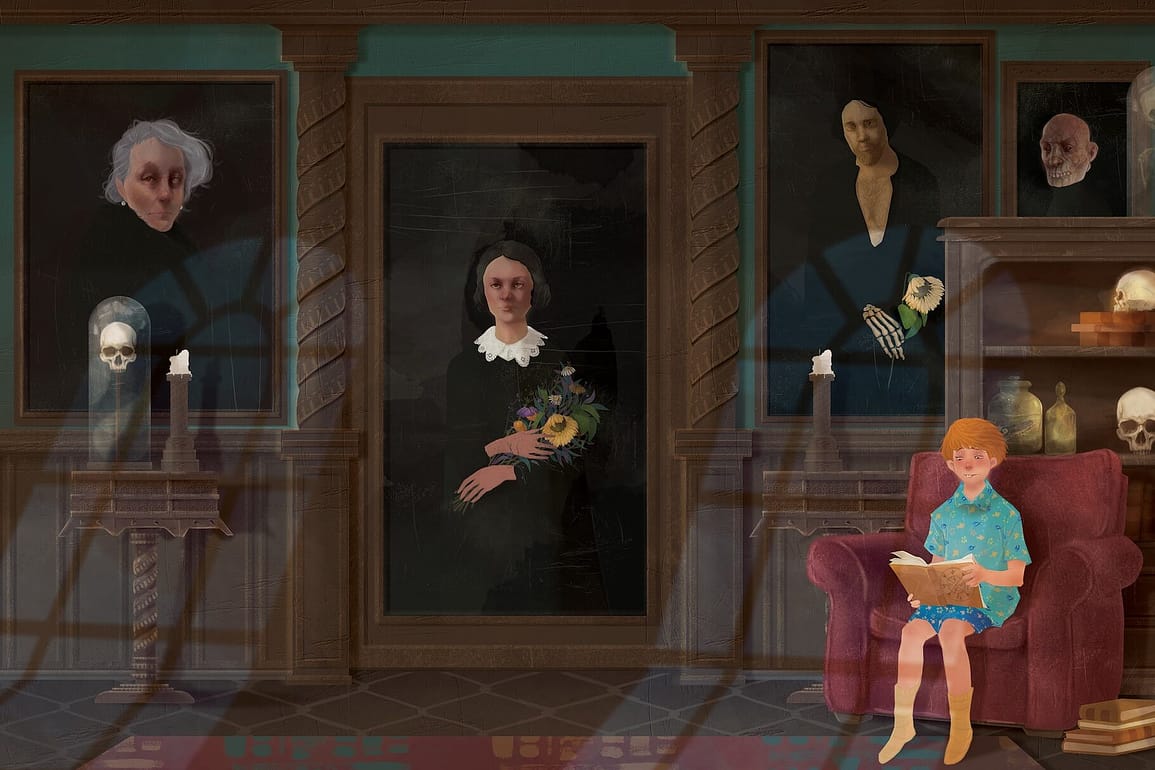 The large, opalescent spears that resided on the windowsills started to break off and fall perilously towards the marble entryway. These home-born stalactites fell nearly 40 feet whenever a particularly strong gust of wind knocked against the house. There isn’t anything truly as frightening as ten-inch spears falling at high speeds towards the entrance of a thin, long home. That, in correlation to the monstrous storm that was raging outside, made this particular environment a highly unpleasant one.

Then the doorbell rang.

A young man by the name of James Matichuck was standing outside the entrance of this tall, skeletal manor. He pulled his oversized coat snugly around his body, to brace his cold self against the bitter cold. James outstretched his index finger again to pressed the ancient doorbell (which was surrounded by a skull that appeared way too realistic. He didn’t want to think about it being a real skull.) Still, no one answered the door. For a second, James wasn’t sure if he should turn around to depart and face the heavy rain or attempt to ring the doorbell a third time. Just as he reached a decision, many things happened at once.

A particularly strong breeze pushed young James forward, towards the tenebrous, tall and dark door then, right before impact, the door itself opened with a loud, sudden creak. James nearly fell into the home but, after stumbling about a bit, regained his balance and composure.

There was a tall, thin, dark, tenebrous man standing in the manor’s landing area. This man looked like the human embodiment of the manor itself. He spoke in a similarly low and rumbling creak.

“You must be Mr. Matichuck,” the tall, thin, dark, tenebrous man said. “My name is Bartholomew and this is Morose Manor. We welcome you.”

And, of course, at this very moment, lightning struck. Followed closely by a loud clap of thunder.

Bartholomew quickly slid to the side, like a shadow. He grabbed James’s forearm and pulled him along with brisk speed.

Suddenly, a calcification fell right where James had been standing just a moment prior. The calcification shattered into a million pieces around the two men’s feet.

“We should take care of that,” Bartholomew said, first giving a side-eyed glance at the granite floors then up at the dark, seemingly endless ceiling. He gave an exasperated sigh then added, “Follow me, if you will, Mr. Matichuck.”

The two walked silently for what seemed like an eternity. The only sounds came from the clicks of Bartholomew’s heels, the rattling windows, and the heavy rain outside. The more they walked, the more fearful and frightening the manor became. James tried his best to not be frightened, though. He stood tall, even though Bartholomew’s long, thin shadow loomed over young James. In the dark silent corridors, James noticed eerie works or art hung high above in oddly intricate and skeletonesque frames. Portraits of unknown soldiers and dukes, landscapes of terrifying battles, and unsettling images of children staring spookily at him as he walked past. This was a bit much, James thought.

James quickly averted his gaze to his guide’s back. It dawned on the young James, only a few moments later, that Bartholomew never turned around to look at him. How did he know he was staring at the artwork?