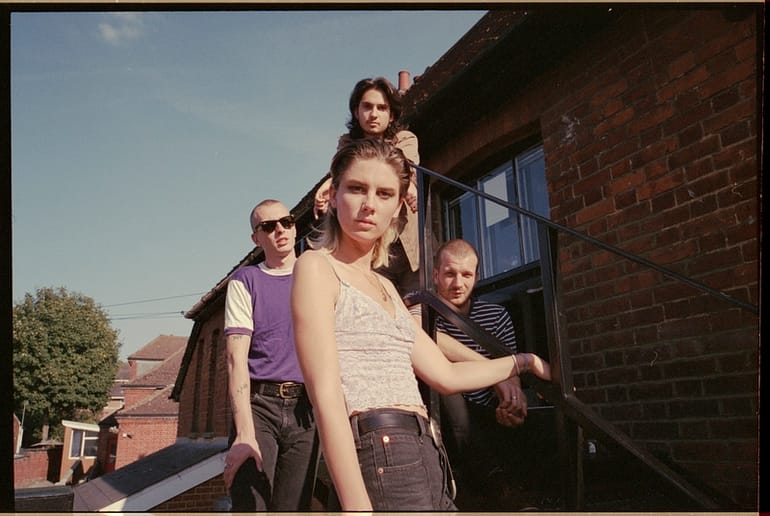 Blue Weekend is Wolf Alice‘s third full-length album, and it may very well be the best project they’ve released so far.

I’ve been a fan of the London-based band—made up of Ellie Rowsell (vocals/guitar), Joff Oddie (guitar), Joel Amey (drums), and Theo Ellis (bass)—since the early 2010s. Back then, I listened to tracks like “White Leather” and “Blush” nonstop.

During their early career, Wolf Alice focused on releasing EPs. Instead of quickly scrapping together the material from the EPs and singles from that time to capture the early hype that surrounded them, Wolf Alice took their time, building up to their debut.

Finally, in 2015, My Love is Cool was finally released. I always lauded their decision to wait, as it seemed they truly cared about their craft and wanted their debut album to be something special, and it truly was!

After My Love Is Cool was released, Wolf Alice blew up in popularity, and understandably so. Now that more people were able to listen to them, it was only a matter of time before they became one of the UK’s best, newest bands.

They followed up My Love Is Cool with Visions of a Life in 2017. Their sophomore album received equally positive reviews and it spawned their current most popular song, “Don’t Delete the Kisses.” This album, sadly, didn’t have as much of a positive impact on me as I’d hoped for. The lyrics seemed a bit cloying, so I lost a bit of interest in Wolf Alice for a few years.

But now they’ve returned with Blue Weekend and I’m certain it’s the best, most cohesive album they’ve released so far. Coming four years after Visions of a Life, Blue Weekend sees the four-piece at their tightest and most confident. Ellie’s vocals have always been the main drive for Wolf Alice but she knocks every single track out of the park. She always sounds so effortlessly cool, while simultaneously bearing her heart and soul. Joel’s drumming drives every song, perfectly keeping the energy at an all-time high. Similarly, Theo’s bass playing adds depth and structure to each track. Joff ties it all together with his grunge-inspired guitar playing and songwriting.

It’s difficult to fully classify Wolf Alice. They’re an alternative rock band, yes, but they go so far beyond the bounds of that moniker. Throughout Blue Weekend’s tracklist, Wolf Alice exemplify their deftness and musical ability by delving into a variety of songwriting styles. They seamlessly go from acoustic folk in “Safe From Heartbreak (if you never fall in love)” to synth-pop in “How Will I Make It OK?” then straight into unhinged, energetic garage rock in “Play the Greatest Hits,” and that’s just tracks 5 through 7. Wolf Alice keep the listening experience fresh, exciting, and unforgettable.

The best thing about Wolf Alice is how cohesively they work as a band. You can tell, even upon the very first listen, that each band member has equal say in the songwriting process. This allows the end product to perfectly highlight each of their best traits, and we get to enjoy it all as listeners.

Blue Weekend is one of those albums that’s great during the first listen, with each subsequent listen further bolstering and highlighting the beauty found therein. I really hope I can catch Wolf Alice live, as seeing them perform has been a dream of mine for quite some time. The songs on Blue Weekend will undoubtedly sound incredible live and I can’t wait to experience them in person.

Listen to Blue Weekend on Spotify, Apple Music, and YouTube.