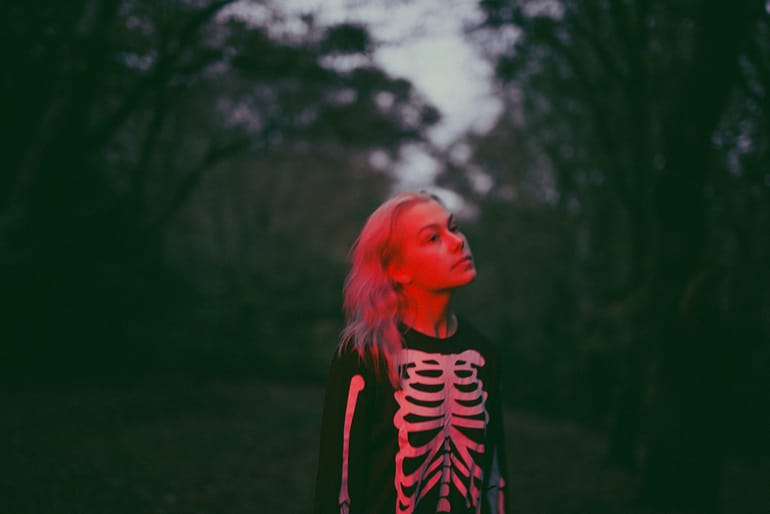 Although Punisher is her second solo album, Phoebe Bridgers has been quite busy in the three years since her  2017 debut Stranger in the Albums. Back then, Bridgers appeared almost out of nowhere, fully-fledged with songs that were as wry as they were heartbreaking. It didn’t take long for her name to become quite well known throughout indie music spheres.

Following up Stranger would’ve seemed like a difficult task, especially for someone who was still a relatively new act. Instead of quickly churning out a second solo album, Bridgers teamed up with two other exceedingly talented solo musicians, Julien Baker and Lucy Dacus, to create indie rock’s greatest supergroup in recent memory, boygenius.
So far, the trio has only released a single EP, in October on 2018. Across the six-track EP, Bridgers, Baker, and Dacus delve into personal and gut-wrenching songs.
Although each song has what you could call a “lead” singer, the true magic comes forth when the voices of the three come together, creating a chorus of emotional melancholy that reaches incredible highs.
This collaborative project showed listeners another facet of Bridgers’ talents. It also strengthened the curiosity and expectations for what Bridgers next solo album would sound like.

But, in yet another unexpected turn, Phoebe decided to team up with yet another musician, this time it was indie-folk stalwart, Conor Oberst (Bright Eyes, Monsters of Folk, Mystic Valley Band). Together, Bridgers and Oberst became Better Oblivion Community Center who released their excellent debut album in early 2019. Here we saw how well Bridgers works with others. For many, this was one of the standout albums from that year. In most of the tracks, Bridgers takes charge, with Oberst singing backing vocals. It goes to show how confident someone as synonymous with the indie music sphere as Bright Eyes’s own Conor Oberst was with Bridgers’ songwriting talents.

At this point, I felt as if we wouldn’t get another solo album from Bridgers, and I didn’t mind in the least. She decided to take a road less traveled, one that’s usually reserved for acts that are looking for a way to find a new audience or to reinvigorate their creativity. Even though she’d only released her first album in 2017, Bridgers went on to found not just one, but two projects with her contemporaries. At this point, I would’ve been more surprised if she announced a new solo album than if she started yet another group. She worked with The 1975 on a song and was going to go on tour with them this year but the COVID-19 pandemic put a pause on that.

Then, almost out of nowhere, a song titled “Garden Song” appeared across streaming platforms. Its video, directed by Jackson Bridgers (Phoebe’s brother), sees Phoebe sitting in her bed, seemingly filming herself with her computer’s webcam, as she takes a huge rip from a bong. Strangeness ensues. The song itself seemed highly reminiscent to Phoebe’s earlier solo work. At first, I was a bit disappointed as it only sounded like a B-side from Stranger in the Alps. Since no album announcement came with the song upload, I thought it was a one-off single. A month later, Phoebe released another single titled “Kyoto.” Now here was the evolution in sound I was hoping for! The song’s instrumentation was a bit more upbeat than Bridger’s previous work but the lyrics were as clever as before. Along with “Kyoto” came the album announcement. Finally, after three years of waiting, Phoebe Bridgers released Punisher on June 18th, 2020.

The album begins with the ominous, lyricless “DVD Menu.” This track serves as the introduction to the album, setting up our expectations for what’s to come. It segues perfectly into “Garden Song,” where we see that Phoebe’s still got it. This song would’ve fit perfectly in Strange in the Alps, making me wonder if it’s an older song or perhaps she decided to start off her second album with something more expected before she goes into a different path. Then we arrive at “Kyoto,” a jovial tune recounting a trip to the Japanese city. This track features trumpets throughout the chorus, a first for Bridgers. “I want to kill you, if you don’t beat me to it,” Bridgers exclaims as the trumpets blare during the chorus. This track was already one of my favorite singles of the year and it just sounds so much better in the context of the album. It’s a great third track but it might’ve been a better choice for the album’s lead single.

Next is “Punisher,” the title track. We’re brought back to Phoebe’s patented heartstring-pulling songwriting. This is what we’re here for! “Halloween,” the fifth track, is a somewhat restrained cut. Bridgers signs in barely a whisper, as subtle guitar melodies resonate in the background, along with sporadic drumming. The comfort this song establishes can almost lull you to sleep. Then, out of nowhere, Conor Oberst appears to sing the refrain “whatever you want, be whatever you want.” It’s a surprise, but a welcome one. The two sing together as the song winds down. That little unexpected detail makes relistening to this song a treat, time and time again.

Now we arrive at the album’s B-side (or “that side” as it says on the vinyl record). There are a few lines in “Moon Song” that remind me a bit of “Smoke Signals,” the opening track from Stranger in the Alps, simply for the fact that Bridgers mentions musicians in both. In fact, the line “It’s been on my mind since Bowie died” in “Smoke Signals” was what made me fall in love with Bridger’s music. David Bowie’s passing, two days after his 69th birthday, in 2016 was still fresh in everyone’s minds in 2017 so when Bridgers mentioned it in a song, I was taken aback. I still get taken aback whenever I listen to “Smoke Signals.” She mentions “Tears in Heaven” by Eric Clapton and John Lennon, seemingly reminiscing about a conversation she had with a friend about these musicians.

Then, in “Graceland Too,” Bridgers references Elvis (obviously connecting to the title). In fact, this track might be my favorite in the album, although the entirety of Phoebe’s sophomore album is full of standout tracks. There’s just something about the third-person narrative that stands out to me. We’re so used to hearing Phoebe sing in first person but in “Graceland Too,” we hear Phoebe sing about someone else (or is it still her?). This track is a bit folkier than the rest of the album. The banjo and fiddle gives it a touch of classic country. You can picture Phoebe singing this, along with her boygenius compatriots, Julien Baker and Lucy Dacus, in a candlelit farmhouse. In fact, I’ve seen many people online call this song a boygenius song but I’m glad Phoebe decided to save this one for her solo album, as it’s perhaps one of the most beautiful songs to come out this year. Baker and Dacus echo the line “whatever you want,” it makes one wonder if this was an intended decision, as Phoebe’s three guest musicians/former supergroup band members sing similar lines in different songs.

The final track, “I Know The End,” starts in a soft, quiet manner, much like what we’ve come to expect from Bridgers. Then, the guitar melody picks up tempo as a violin begins to wail. A drum beat creates an anticipation, as everything begins to build up. Suddenly, trumpets begin to play in a tone reminiscent of something from Sufjan Steven’s “Michigan.” Phoebe and a gang of vocalists exclaim “the end is near,” repeating the line over and over until the music begins to crescendo; the trumpets, drums, and voices all scream together. It’s incredibly cathartic. The last we hear is Phoebe growling, close to the mic, before laughing as it cuts to black.

And that’s it! Punisher by Phoebe Bridgers might be one of the best sophomore albums I’ve heard in quite some time. It’s a journey into Bridgers’ mind; in fact, it almost feels as if she’s simply reading from her diary. But the incredible production and instrumentation, not to mention the guest musicians, take this album to the next level. I can’t wait to see what Bridgers does next but if this album is any indication, she’s already cemented herself as one of the most formidable new acts of this generation.